From the 16th to 19th centuries the riverside town of Hoi An attracted silk, spice and porcelain merchants from as far as Japan, India, Indonesia and Europe. Hoi An still retains many remnants of its trading days and its Old Quarter has been beautifully preserved. 850 magnificent old structures still line the streets and the old tile-roofed shop houses, shady pagodas and colorful communal halls have earned the town the status of World Heritage Site by UNESCO. The beautiful surrounding countryside and unspoilt beaches also imbue the whole area with a very restful, rustic charm.

Japanese Bridge - Wandering in the tiny yet beautiful Hoi An town the UN yet beautiful Hoi An town the UNESCO World Heritage Site, one may come across a bridge with elegant curves and elaborate decorations - the Japanese Bridge, which was built in the early 17th century by Japanese craftsmen who were part of a larger community of Japanese merchants active in this town. At that time, the bridge acted as a symbolic gesture of peace between the Japanese community and the Chinese quarter. Streets, shops, pagodas and houses were also constructed since then. But no one knows exactly who built this amazing work although it has been appreciated for centuries.

The bridge is renowned by its exquisite decorations. A pair of monkey and dog statue is placed at both ends for the bridge was started and completed in the year of the two animals. Porcelain bowls applied to endure the ends of the tile. There’s a small shrine used to honor the northern deity Tran Vo Bac De who controls weather. Two major streets of Hoi An’s old quarter are connected by this 20-meter-long bridge above the serene Thu Bon River. You can easily find art galleries and cafes line both sides of the peaceful street beyond.

Read more: Top tourist attractions to visit in Hoi An town
Hoi An was named as the best city in the world of 2019

My Son Sanctuary -  My Son Sanctuary is a large complex of religious relics that comprises more than 70 architectural works. Located in a narrow valley in Duy Tan Commune, Duy Xuyen District, Quang Nam Province. 70km southwest of Danang City, 20km away from the Tra Kieu Citadel, and 40km away from the Ancient Town of Hoi An. My Son site is a group of temple-towers of Cham people, an imperial city during the Champa kingdom, an example displaying the evolution and change in culture, a foremost evidence of Asian civilisation which is now extinct. With its great value, in December 1999, the complex of My Son Cham Towers has been recognised as a World Heritage Site by UNESCO.

My Son is one of the can-not-miss attractions when you visit Central Vietnam. Usually, tourists come to Hoi An ancient town and then take a day tour from there to this site. Holding the unique sanctuary beauty of an ancient culture as well as diversified architecture style, My Son holy-land will be a treat for cultural and architecture lovers.

Tra Que Herb Village - Tra Que is a small village located 2 km north-east of Hoi An Ancient Town. The village has existed for at least 300 years. It is located between Tra Que algae pond and the De Vong River, with special conditions producing rich soil and ideal for growing fresh herbs. Tra Que is not just a brand name for the village’s fragrant and high quality herbs, but it is also an attractive destination for tourists staying in Hoi An.

The village is named after the sweet scented herbs that are used in the everyday meals of Hoi An people, such as mint, coriander and basil. A tour of the organic vegetable and herb gardens can include some time working in the fields if you like (wearing local farmer's clothes!), watering and hoeing vegetable beds, or merely enjoying the peace and tranquility and marveling at the glorious sunsets. Located in the heart of the famous herb village, Tra Que Water Wheel restaurant is a rustic-designed, restored, traditional Vietnamese building. Here you can enjoy the beautiful surroundings while you watch the farmers at work tending their produce or engage in local farming life preparing soil for sewing, fertilizing and watering. You may also enjoy some excellent herbal massage in your Vietnam customized tour and try your hands at cooking your favorite Vietnamese delicacies like spring rolls and fish sour soup. 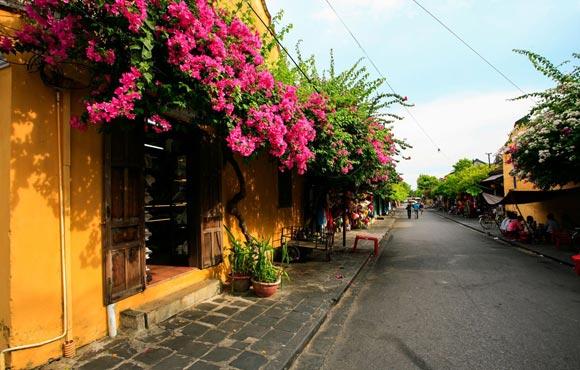 Tour in Hoi An