The nickname for Mekong Delta is ‘the rice basket of Vietnam’, for the rich and lush area is covered with rice fields and fish farms that yield sizable surplus to feed the country. Traveling Mekong Delta is a must-do for every first-time visitors having Vietnam private tour. Mekong Delta attractions feature the region’s diversity that makes it so memorable: friendly inhabitants working on the life-sustaining river, green rice paddies shine under the sun, kids riding on the backs of buffalo or cycling through country lanes, vendors grinning behind stacks of fruit packed on their sampas, Khmer monks walking contemplatively in the shadow of pagodas, etc,.

Cai Rang Floating Market - Just 6km from Can Tho in the direction of Soc Trang is Cai Rang, the biggest floating market in the Mekong Delta. There is a bridge here that serves as a great vantage point for photography. The market is best before 9am, although some vendors hang out until noon. It is quite an experience to see this in full swing, but it is well worth getting up extra early to beat the tour group crowds or you may end up seeing almost as many foreigners as market traders.

Cai Rang can be seen from the road, but getting here is far more interesting by boat. From the market area in Can Tho it takes about an hour by river, or you can drive to the Cau Dau Sau boat landing(by the Dau Sau Bridge) , from where it takes only about 10 minutes to reach the market.

Chau Doc Floating Market - Going to Chau Doc, you may have enabled yourself to discover the charming attraction in the three-hour visit. This tour bring you to the floating market place, the floating village offshore, a Cham village along the river, and maybe a peek in the Kenh Vinh Te, the canal that leads south to Ha Tien.

Being busiest around 7am, the floating market is around 10 minutes downstream on the central market place. In the morning, many boats are going to be fully crammed up using goods, especially fruit to get ready for an industry day. Boats head off to receive fruit in Sa Dec or Can Tho every day or two, but there’s always plenty of business inside early hours.

Read more: 6 interesting things to do in Mekong Delta

Floating village would be another stop you shouldn't miss, which are selection of houses with roof as well as wall made of aluminum. Inside are plenty of huge, netted ‘fish farms embedded, ’ where by hundreds and a huge selection of ca vo dem sea food await canh chua servings; some visitor could possibly get shipped downriver to Can Tho as well as beyond. Note the huge moored wood boats, which avalanche their reduced decks to maintain the sea food alive through the trip.

In addition, Da Phuoc is another must-see place in Chau Doc, which is a Cham village along the river on Con Tien Tropical isle from Chau Doc’s heart. Along the streets, you should have chances to find out many females having turbans made of Cham-style fabrics that they can weave – through dry time – underneath their houses that endure on stilts. Inside rainy time, because the river level rises up extremely high, Cham females usually placed on conical caps or nón lá once they go to Chau Doc Market, to “blend in’ apparently. The 1992 mosque sometimes hosts marriage ceremony parity, because buildings inside village will not be large plenty of to host the wedding; note the little cemetery behind the building.

Cao Dai Temple - After Tay Ninh, this temple is the largest such structure in Vietnam, serving about 50,000 followers in central Vietnam. As with all Cao Dai temples, prayers are held four times a day, at 5.30am, 11.30am, 5.30pm and 11.30pm. The left-hand gate to the complex is for women; the right-hand gate for men. The doors to the sanctuary are similarly segregated, although priests of either gender use the central door. Behind the main altar sits an enormous globe with the Cao Dai ‘divine eye’ symbol on it. A sign reading van giao nhat ly (all religions have the same reason) hangs from the ceiling in front of the altar. Behind the gilded letters is a picture of the founders of five of the world’s great religions. From left to right are Mohammed, Laotse (wearing Eastern Orthodox-style robes), Jesus, a Southeast Asian-looking Buddha and Confucius (looking as Chinese as could be).

Binh Thuy Ancient House - Binh Thuy ancient house in the Mekong Delta city of Can Tho is an ideal place to explore the region’s history. Located at 26/1A Bui Huu Nghia Street in Binh Thuy ward, about five kilometres from downtown Can Tho, the house is filled with features that represent rural areas in the Mekong Delta region during the 20th century. The French-style house was built in 1870 by the Duong family on an area of nearly 6,000 sq m. Its base is about one metre higher than the land surface. In order to keep warm and avoid termites, the house owner sprayed a 10 cm layer of salt under the floorboards. With front and back gardens, the five-room house offers a comfortable environment full of fresh air and brilliant sunshine. The house is now preserved by Duong Minh Hien, the sixth generation of the Duong family.

Hien said the house has an orchid garden with various types of flowers, which his father, Duong Van Ngon, spent a lot of time and effort on. According to Le Hung Dung, Chairman of the municipal People’s Committee, there are very few ancient houses in the Mekong Delta region and Can Tho city in particular. He underlined the need for the city to devise strategic measures in order to preserve and promote the house’s traditional values, thus serving tourism development.

Binh Thuy ancient house has been captured in many films such as “The silt ways,” “The Bac Lieu mandarin’s son” and “The lover” of French director J. Annaud. 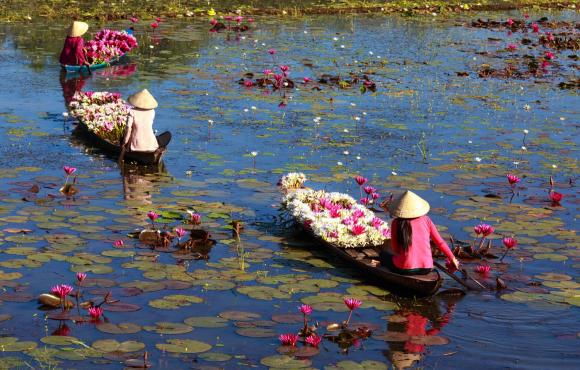 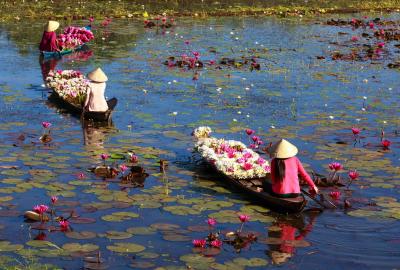