At first glance, the provincial capital of Ninh Binh appears to be yet another dusty, traffic-heavy northern town. However, glance to the west and you’ll be beckoned to stay by a thousand fingers of limestone – a land-lubbing Halong Bay, with a clutch of historic and architectural sights to add to its geological beauty.

Tam Coc - It’s hard not to be won over by the mystical, watery beauty of the Tam Coc “three caves” region, which is effectively a miniature landlocked version of Ha Long Bay. The film Indochine helped to put it on the tourist map, and both good and bad have come of its burgeoning popularity – access roads have been improved, though some of the canal banks themselves have been lined with concrete. In addition, Tam Coc has become relentlessly commercial, with many travellers having a wonderful day spoiled by hard-sell antics at the end of their trip. Despite the over-zealous – occasionally aggressive – peddling of embroideries and soft drinks by the rowers, the two-hour sampan-ride is a definite highlight, meandering through dumpling-shaped karst hills in a flooded landscape where river and rice paddy merge serenely into one; keep an eye open for mountain goats high on the cliffs, and bright, darting kingfishers. Journey’s end is Tam Coc, three long, dark tunnel-caves (Hang Ca, Hang Giua and Hang Cuoi) eroded through the limestone hills with barely sufficient clearance for the sampan after heavy rains. On the way back, you can ask to stop at Thai Vi Temple, a short walk from the river. Dating from the thirteenth century and dedicated to the founder of the Tran Dynasty, it’s a peaceful, atmospheric spot for travelers having tours in Vietnam.

Bich Dong - If you have time after the boat trip, follow the road leading southwest from the boat dock for about 2km to visit the cave-pagoda of Bich Dong, or “Jade Grotto”. Stone-cut steps, entangled by the thick roots of banyan trees, lead up a cliff face peppered with shrines to the cave entrance, believed to have been discovered by two monks in the early fifteenth century. On the rock face above, two giant characters declare “Bich Dong”. The story goes that they were engraved in the eighteenth century by the father of Nguyen Du (author of the classic Tale of Kieu), who was entrusted with construction of the complex. The cave walls are now scrawled with graffiti but the three Buddhas sit unperturbed on their lotus thrones beside a head-shaped rock which purportedly bestows longevity if touched. Walk through the cave to emerge higher up the cliff, from where steps continue to the third and final temple and viewpoint over the waterlogged scene.

Hoa Lu - Twelve kilometres northwest of Ninh Binh, Hoa Lu makes another rewarding excursion. In the 10th century, this site was the capital of an early, independent Vietnamese kingdom called Dai Co Viet. The fortified royal palaces of the Dinh and Le kings are now reduced to archeological remains, but their dynastic temples (seventeenth-century copies of eleventh-century originals) still rest quietly in a narrow valley surrounded by wooded, limestone hills. Though the temple buildings and attractive walled courtyards are unspectacular, the inner sanctuaries are compelling – mysterious, dark caverns where statues of the kings, wrapped in veils of pungent incense, are worshipped by the light of candles.

Cuc Phuong National Park - In 1962 Vietnam’s first national park was established around a narrow valley between forested limestone hills on the borders of Ninh Binh, Thanh Hoa and Hoa Binh provinces, containing over two hundred square kilometres of tropical evergreen rainforest. Cuc Phuong is well set up for tourism and sees a steady stream of visitors, attracted principally by the excellent primate rescue centre, but also by the easy access to impressively ancient trees. With more time, you can walk into the park interior, overnight in a Muong village and experience the multi-layered forest. The most enjoyable time for walking in these hills is October to January, when mosquitoes and leeches take a break and temperatures are relatively cool – but this is also peak season. Flowers are at their best February and March, while April and May are the months when lepidopterists can enjoy the “butterfly festival” as thousands of butterflies colour the forest. 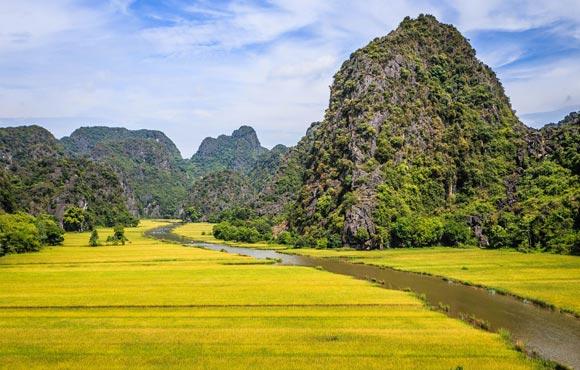 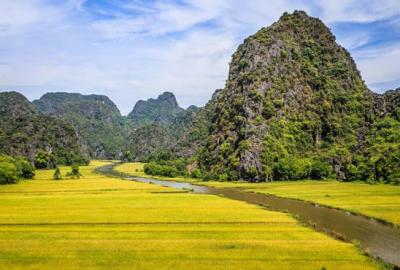