Once the royal seat of the ‘land of thousand elephants’ as the Lan Xang Kingdom was known, Luang Prabang is located at the confluence of the Mekong and Nam Khan Rivers. The elegant tranquility of this charming town was described as an "outstanding example of the fusion of traditional architecture and Lao urban structures with those built by the European colonial authorities in the 19th and 20th centuries" when it received World Heritage Status in 1995 by UNESCO. With over 30 temples and pagodas within its jurisdiction it is best visited on foot or by bicycle. Several very stylish boutique hotels and excellent restaurants have emerged over recent years making this a truly delightful corner of the region to escape to.

XIENG THONG TEMPLE - Wat Xieng Thong (or Temple of the Golden City) is a Buddhist temple (wat), located on the northern tip of the peninsula of Luang Phrabang, Laos. Wat Xieng Thong is one of the most important of Lao monasteries and remains a significant monument to the spirit of religion, royalty and traditional art. There are over twenty structures on the grounds including a sim, shrines, pavilions and residences, in addition to its gardens of various flowers, ornamental shrubs and trees.

ROYAL PALACE (HAW KHAM) - The Royal Palace (official name "Haw Kham") in Luang Prabang, Laos, was built in 1904 during the French colonial era for King Sisavang Vong and his family. The site for the palace was chosen so that official visitors to Luang Prabang could disembark from their river voyages directly below the palace and be received there. After the death of King Sisavang Vong, the Crown Prince Savang Vatthana and his family were the last to occupy the grounds. In 1975, the monarchy was overthrown by the communists and the Royal Family were taken to re-education camps. The palace was then converted into a national museum.

KHOUANGSY WATERFALL - The beautiful multi-tiered KhouangSy waterfall is worth a trip from Luang Prabang for its refreshing beauty and serenity. Turquoise-green water tumbles over a series of limestone steps and collects in beautiful pools surrounded by lush greenery. Walkways lead around the base and to the summit, about 200 feet (61m) up, with plenty of spots for a relaxing picnic.

WAT MAI - Just beside the Royal Palace Museum, the Wat Mai is the largest temple in Luang Prabang. Built in the late 18th century, it is one of the major religious sites in the city, having been the main residence of Pra Sangkharat (the patriarch of Lao Buddhism) before the position was shifted to Pha That Luang in Vientiane.

The most astounding feature of Wat Mai is the five-tiered roof of the sim (ordination hall) which showcases a classical Luang Prabang style and shelters a beautiful veranda with gold-filigreed columns and spectacular gilded wall reliefs depicting scenes from the Ramayana and Buddha’s life. The temple was deemed to be so beautiful that it was spared from destruction during the Siamese invasion in 19th century.

Inside the sim, there is a sitting Buddha statue on the altar surrounded by smaller Buddhist images. The Wat Mai once housed the Luang Prabang's most revered Buddha image, the Phra Bang, which was late removed to the Royal Palace Museum. Every year during the Lao New Year, the Phra Bang is carried from the museum to Wat Mai and displayed for three days.

WAT VISOUN (WAT WISUNARAT) - Wat Visoun (Wat Wisunarat) is one of Luang Prabang's oldest operating temples. It was reconstructed in 1898 due to the Black Haw bandit invasion. The Haw left with most of the priceless Buddha images made from jade, gold and precious gems by breaking open the stupa. Prior to invasion, Wat Visoun was once home to the revered Pha Bang Buddha from 1507 to 1715 which can now be viewed at the Royal Palace Museum.

One of the temple’s most unique features is its unusually shaped stupa designed by the wife of King Wisunarat to be a lotus flower but referred to by locals as ‘the watermelon stupa’. Another distinguishing highlight is the European-style roof which slopes in a manner not usually seen in Laos. This is largely due to the French architects who helped with the rebuilding in the late 1980s. The temple is still functioning today and is open to visitors with plenty of information available about its fascinating history.

PAK OU CAVES - The Pak Ou Caves are among the most revered holy sites in Laos. Near Pak Ou (mouth of the Ou river) the Tham Ting (lower cave) and the Tham Theung (upper cave) are caves overlooking the Mekong River, 25 km to the north of Luang Prabang, Laos. They are a group of two caves on the west side of the Mekong river, about two hours upstream from the centre of Luang Prabang, and have become well known by tourists. 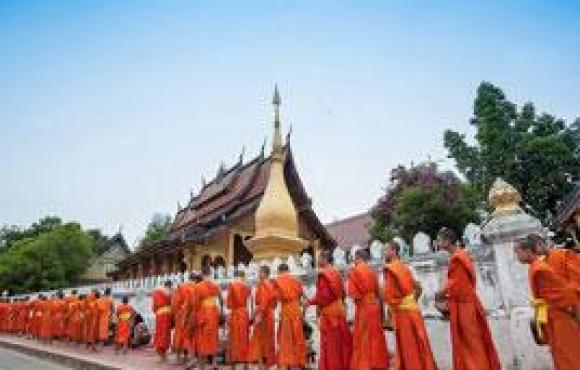 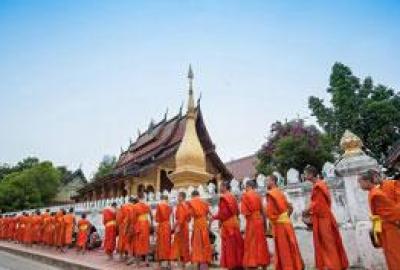 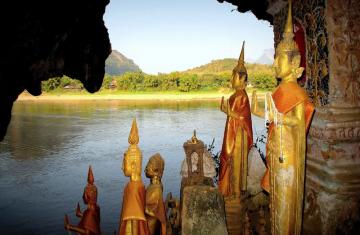 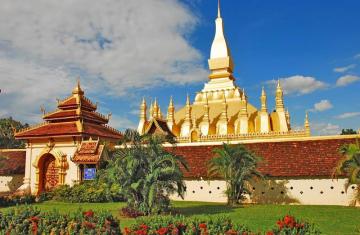 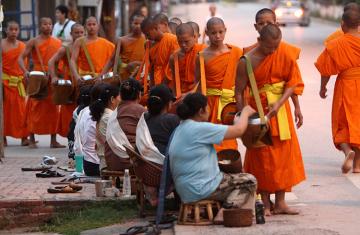 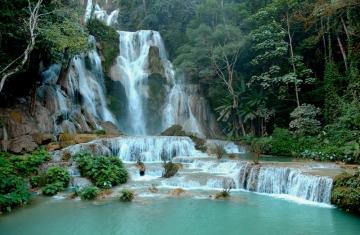