The largest city in Central Vietnam, Da Nang is primarily used by travellers as a jumping-off point for Hoi An, a city that has no airport or train station of its own. However, stick around a while and you’ll find an unexpectedly amiable place, whose burgeoning middle class are seeing their cosmopolitan desires sated with a slew of trendy bars and cafés. The old French presence is also apparent in the leafy boulevards and colonial edifices along the riverfront promenade.

Selected as one of the top 10 worth-living cities in the world in 2018, Da Nang is must- visit city on any Vietnam private tour. You can pay a visit to popular My Khe Beach. Its long stretch of white sandy coastline, together with blue sky and clear water all year around can captivate any tourists on their holidays in Vietnam. Besides, it also offers a wide ranges of water sports for tourists including surfing, sunbathing and parachuting – suitable for those who fancy adventurous experiences.

Another sites in Da Nang deserves to explore is Son Tra Penisula - a breath-taking national park as well as an ideal retreat for tourists looking for a way to escape the heat and traffic of the city. The mountain is covered in lush green and surrounded by pristine beaches such as Bai Bac, Bai Nam, etc. – which makes this destination worthy of your time. The winding and inclining road around Son Tra Mountain is suitable for motorcyclists, however, only powerful ones are allowed. Besides, enthusiastic hikers can also enjoy their experience spotting rare species of red monkeys that are hardly found anywhere else in the world along the verdant jungle trails. It will absolutely one of the most wonderful memories of any Vietnam customized tour!

It is a huge mistake if you are not come to Asia Park and Ba Na Hills on your as they are listed as two of the most popular tourist attractions in Vietnam. Asia Park is one of the biggest and most modern amusement parks in South East Asia. This recreational park consists of three main areas: an amusement park with modern rides, attraction and shows; a cultural park that display traditional architecture and horticulture features from 10 countries and central zone with the interface between modern and traditional features. With its complete package of rides, attractions, shows and restaurants, you surely can gain your best experience here, don’t miss out!

Beside Asia Park, “the Disney Land of Vietnam” – Ba Na Hills also captivate tourists with its fantastic appearance – which resembles an antiquated castle but the insides might surprise you with modern accommodations, world class restaurants and a Fantasy Park full of thrilling games. On your way to visit Ba Na Hills, it is recommended that you give the cable car a ride as this cable car holds several Guinness World Records including being the longest System Cable Car in Asia.

The elongated oval of Da Nang occupies a small headland protruding into the southern curve of Da Nang Bay. The city faces east, fronting onto Bach Dang and the Han River, across which the narrow Son Tra Peninsula shelters it from the South China Sea. The city itself harbours few specific sights of its own, beyond the wonderful Cham Museum with its unparallelled collection of sculpture from the period. However, there are a number of interesting sights in the area – just across the Son Tra Peninsula is China Beach, an increasingly developed stretch of sand from which you can see Monkey Mountain to the north and the Marble Mountains to the south. 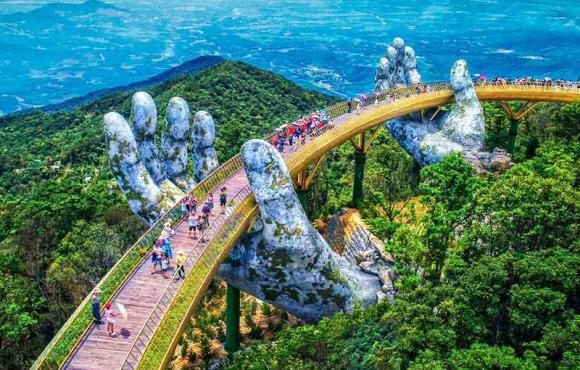 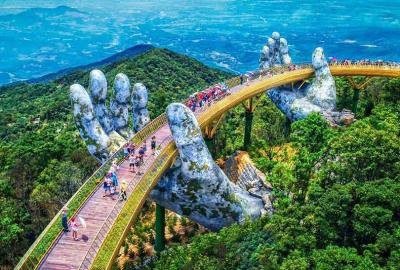