Home
Travel Guide
Things to do and see 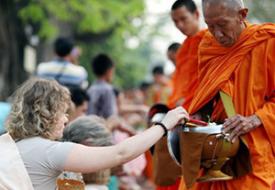 Things to do and see

Laos is said to be the most laid-back country in South East Asia. Once getting here, travellers will unconsciously slow down to match the peaceful tone and slow pace unique to this pristine land. You will soon learn that the most enjoyable way to travel in Laos is to observe the local customs and rule, use your common sense and just go with the flow.

Admire the sweeping lines of Wat Xieng Thong - Perhaps the grandest of all Laos temples, Wat Xieng Thong’s soaring rooftops hark back to Luang Prabang’s golden era. The sim (chapel) was founded in 1560, and the complex is richly decorated with coloured glass and gold. It’s a stunning example of traditional Laotian architecture and hosted important royal rituals when Luang Prabang was capital of the Kingdom of Laos.

Chill out in laidback Luang Prabang - Sprawling along the banks of the mighty Mekong River, UNESCO-listed Luang Prabang is the nation’s most important cultural and religious centre. Scattered around the historic centre are dozens of historic monasteries, and queues of monks wind through the city streets every morning. Travellers love Luang Prabang for its relaxed pace of life and delicious food, best sampled along the riverbank.

Cruise the mighty Mekong - The Mekong River forms the border between Laos and Thailand, and cruising this mighty waterway is the best way to experience the slow, easy rhythms of life in this Asian backwater. One stunningly romantic trip is the three-day cruise from Pakse to the ruins of Vat Phou, aboard a gorgeous converted teak barge.

Drift along a river - Floating in a tyre inner tube might sound like an unlikely tourist attraction, but travellers have been lazily bobbing along the Nam Song River at Vang Vieng ever since Laos reopened to tourism in the 1990s. Today, hedonistic Vang Vieng is a victim of its own success, but travellers still flock to tube on the river and sip beers in riverside bars.

Explore one man’s obsession in Xieng Khuang - South of Vientiane, close to the Thai border crossing at Nong Khai, the sculpture garden at Xieng Khuang was created by the eccentric monk Luang Pu Bunleua Sulilat, who devoted a lifetime to creating a representation of Buddhist heaven and hell on Earth in the form of cement statues. Vendors nearby serve grilled river fish and pounded papaya salad.

Learn to cook Laos’ delicious cuisine - If you enjoy the rich flavours of Laotian cuisine, you can learn to make the same dishes on a cooking course in Vientiane or Luang Prabang. Most classes include a visit to the local market to purchase meat, vegetables, herbs and spices, so you’ll know exactly what you need when you try to make your first Laotian meal at home.

Marvel at the intricacy of Laotian silk - Laos is famous across Asia for its fine silk weaving, a tradition practiced for centuries by hill tribe villages using traditional backstrap looms. Local silk is used to make everything from shawls and sarongs to shirts and bags – the weaving village of Ban Phanom near Luang Prabang is a great place to see the weavers at work.

Meet a monk - As dawn breaks across Laos, the streets are criss-crossed by saffron-coloured lines of monks, queuing up to receive alms from local traders. It’s one of the most photogenic sights in Asia, and worth getting up for every morning. Luang Prabang is probably the most scenic spot for monk watching, but this ritual unrolls in every town each morning.

Meet the local wildlife - The jungles of Laos are a hotbed of biodiversity, home to hundreds of species of birds and elusive tigers, elephants, rhinos and bears. Getting close to the wildlife involves trekking into national parks, or in the case of the Bokeo Nature Reserve near Hoay Xai, travelling through the forest canopy on zip wires in search of the illusive black gibbon.

Pause to reflect in the Pak Ou Caves - The limestone mountains of Laos are worm-holed with caverns, and many have been worshipped as shrines since time immemorial. The fascinating Pak Ou Caves, a speedboat ride north from Luang Prabang, are full of hundreds of Buddha images, left there over centuries by local worshippers. It’s a ritual harking back to animist traditions, and the caves are incredibly photogenic.

Ponder the mystery of the Plain of Jars - Laos’ most enigmatic sight, the Plain of Jars, near Phonsavan, is swathed in legend and mystery. The grasslands are covered in hundreds of stone jars, some weighing up to six tonnes. Local legend says they were used to ferment rice wine in the sixth century to celebrate a victory in battle, but nobody knows for sure why they were created.

Search for dolphins on the Mekong - The waterways of Laos are one of the last refuges of the critically endangered Irrawaddy dolphin, which can be spotted on the Mekong River, particularly around Si Phan Don (Four Thousand Islands). This laidback archipelago is one of the favourite backpacker hangouts in Laos, and the starting point for trips to spectacular Khone Phapheng, Southeast Asia’s largest waterfall by volume.

Step back into the mists of time at Vat Phou - The ruins of lost empires lie scattered across Laos, but perhaps the most evocative site is the ruined Khmer Hindu temple complex of Vat Phou, constructed on a mountain top by the same empire builders who went on to create the mighty temples of Angkor in Cambodia. The approach by river from Pakse is almost as atmospheric as the ruins themselves.

Tour temples and markets in colonial Vientiane - With its fading French colonial architecture and handsome Buddhist wats and stupas, Vientiane is the living image of Indochina. Home to less than 800,000 people, but dotted with golden temples, this is one of the smallest, quietest and most relaxed capital cities in the world, nestled in fertile plains on the banks of the Mekong River.

Trek to hill tribe villages - Like neighbouring Thailand and Myanmar, Laos is home to thousands of tribal people, who live in peaceful isolation in the jungles of the central highlands. The most popular starting point for treks to meet tribal people is the sleepy town of Muang Xing in mountainous Luang Namtha province, which is ringed by Akha and Tai Leu hill tribe villages.

Trek to waterfalls and tribal villages on the Boloven Plateau - The Boloven Plateau in Champassak province is cloaked in jungle, dotted with hill-tribe villages, and watered by some of Southeast Asia’s most impressive waterfalls. Pakse, home to many ethnic minority groups, is the region's capital and the ideal base from which to explore, with organised treks to remote villages and thundering cascades.

Watch sunset from the summit of Mount Phousi - As sunset falls over the Mekong River, the best place to catch the show is the summit of Mount Phousi in Luang Prabang, which is actually just a modest hill in the centre of the old town. A naga staircase climbs to the top, where a sacred stupa offers panoramic views over Luang Prabang and the surrounding rivers and hills.