Located just 15km off the coast of Cambodia in the Gulf of Thailand, Phu Quoc Island rises from its slender southern tip like a genie released from a bottle. Virtually unknown by outsiders a decade ago, it has now cast a spell on enough visitors, with its soft-sand beaches, swaying palms and limpid waters, to challenge Nha Trang as Vietnam’s top beach destination. Spanning 46km from north to south, it’s Vietnam’s largest offshore island (593 square kilometres), though Cambodia also claims the island, calling it Ko Tral. Phu Quoc is just 45km from Ha Tien, and a little under 120km from Rach Gia.

The topography and vegetation are quite unlike the rest of the delta, and give the place a totally different feel. Phu Quoc’s isolation made it an attractive hiding place for two of the more famous figures from Vietnam’s past. Nguyen Anh holed up here while on the run from the Tay Son brothers in the late eighteenth century, and so too, in the 1860s, did Nguyen Trung Truc. Today, over eighty thousand people – and a sizeable population of indigenous dogs (recognizable by a line of hair running up the spine instead of down) – dwell on the island, famous throughout Vietnam for its black pepper and its fish sauce (nuoc mam), which is graded like olive oil.

Like Mui Ne, Phu Quoc is a favourite bolt-hole for expats living in Ho Chi Minh City and, with work almost complete on an international airport in the centre of the island, slated to open in 2012, its future looks rosy. Yet while resorts and bars are springing up fast and access roads are being sealed, for the moment Phu Quoc still retains something of a pioneer outpost feel. Many places can only be reached via dirt tracks and the beaches are largely free of vendors. In the rainy season (May–Oct) Phu Quoc is relatively quiet, and room rates become more easily negotiable, though in peak season (Dec–Jan), accommodation prices can increase sharply and advance booking is necessary. Thinking of a luxury beach break in a stunning island to enjoy the festive season with reasonable budget, Phu Quoc is the place you should think about in your Vietnam private tour. Though tourism has grown rapidly in the largest island of Vietnam in the last few years with many new resorts, hotels and restaurants but Phu Quoc still remains its breathtaking beauty. The Long Beach in Phu Quoc Island was selected by CNN as one of the best beaches in the world. If you are looking for a quiet and less crowded beach, Bai Sao or Ong Lang Beach on the other side of the island will be the ideal places. Watching the marvelous sunset while having a beer in the late afternoon is an unforgettable experience for any travelers in Vietnam. 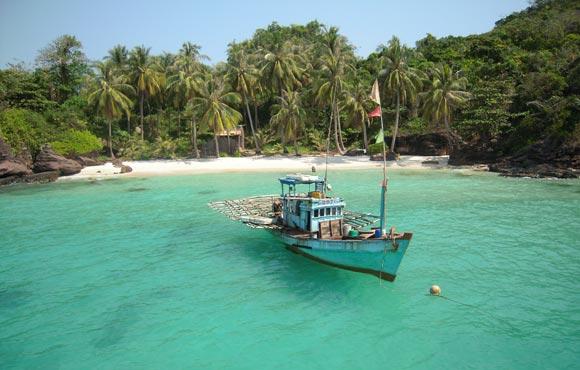 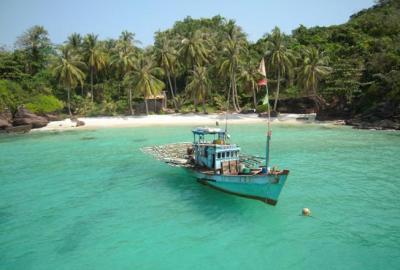