Cao Bang is a province located in the North - East mountains of Vietnam, which is about 280 km from Hanoi. Cao Bang shares a long border with China, adjoins Bac Kan, Lang Son, Tuyen Quang and Ha Giang to form a complete loop of North East Vietnam Tour. Because of its tactical location, Cao Bang has been involved in many important phases of Vietnam history, especially in the 20th century.

Cao Bang is a mountainous province which is mostly covered by jungle. That is the reason why travelling back and forth there by car is pretty hard, especially during the rainy season. There are also many ethnic groups living in Cao Bang, Tay Group is probably the most populated. The great cultural diversity in Cao Bang offers travellers unique oppoturnity to have wonderful experience interacting with local people.

Having a long history and breathtaking natural landscapes, Cao Bang has a lot of places for tourists to visit on their Vietnam travel packages. The most famous destination in Cao Bang can be Ban Gioc Waterfall and Nguom Ngao Cave in Trung Khanh. Travellers can also be entertained while visiting Thang Hen Lake in Tra Linh. Besides beautiful natural attractions, Cao Bang offers several historical sites where Ho Chi Minh President lived and worked before like Pac Bo Cave and Lenin Stream.

Ban Gioc Waterfall is the most majestic and beautiful waterfall of Vietnam, located in Dam Thuy commune, Trung Khanh district, Cao Bang. Far from this site, tourists can hear the rushing waterfall. From a height of over 30 m, large bodies of water pour down through many limestone steps. In the middle of the waterfall is a large rock tissue covered with trees that split the water into three streams like three white silk strips. On sunny days, the steam also creates a shimmering rainbow.

Nguom Ngao Cave is located in Gun village, Dam Thuy commune, Trung Khanh district, Cao Bang province, only 3km from Ban Gioc waterfall. The cave has a length of over 2000m and consists of three main gates, Nguom Ngao, Nguom Lom and Ban Thuon. This is one of the very famous Cao Bang tourist destinations that attracts thousands of visitors having Vietnam customized tours. Going deep inside, visitors will be overwhelmed by its fanciful and impressive stalactites with many glittering, golden shapes. The stalactites rising from the bottom or from the top drop down to create extremely vivid and interesting landscapes. 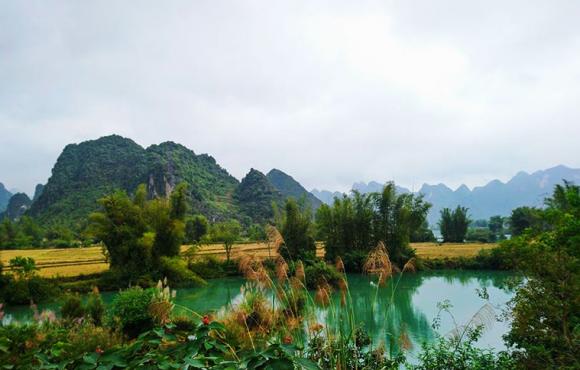 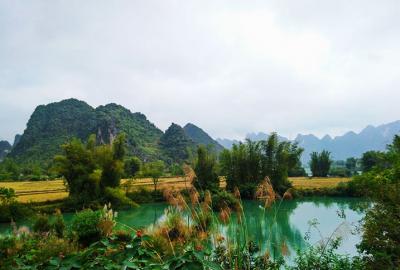